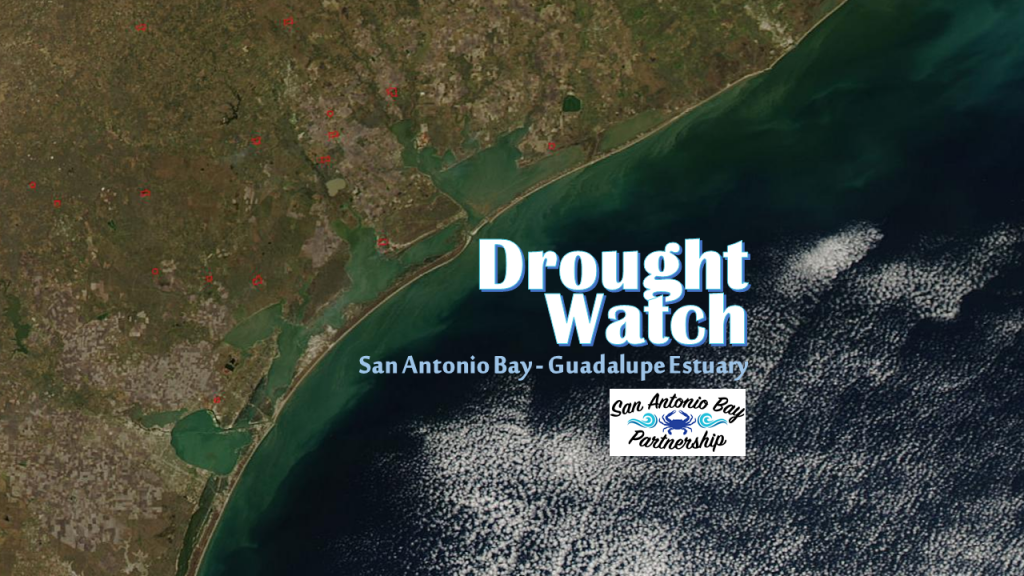 As recent observations of stream flow and drought index data have revealed an increasingly alarming trend in the South Central Texas/Middle Texas Coast region,  SABP has compiled the most recent data into a series of images illustrating the current status of drought conditions and stream flow, as well as salinity at TWDB’s “DELTA” water quality monitoring station in San Antonio Bay, near Seadrift, TX.

4/22/2021 As I indicated in my message last week, I spent a few days in West Texas, the Big Bend area mainly.  The good news was that as we were driving back, we encountered some fairly widespread rain.  But this week’s just published measures of meteorological  and hydrological drought still tell a story of a parched landscape in most areas of Texas, including the Big Bend area.  There is an area in West Central Texas where things are slightly less severe — along the I-10 route we took between Fort Stockton and  Junction, where conditions on the surface looked pretty good, wildflowers especially.  This improvement trend is also borne out in the hydrologic data for that area, and what appears to be a slight improvement in hydrologic conditions in portions of deeper South Texas.

However, as hopeful as this appears, I’m not terribly optimistic that we’ll see this slight improvement continue, or expand over a broader area of either the coast itself or in the basins feeding our bays and estuaries.  I hope I’m wrong, but as we move into late spring and then summer, I expect things may get worse, quickly.