In 2015 San Antonio Bay Partnership and Texas Master Naturalists, Mid-Coast Chapter developed a program to get area children out into the bird-rich area in which they live. Allan Berger and Brigid Berger were inspired when they saw a large group of very excited young people walk through the vendor exhibits at the Rockport HummerBird Celebration on their way to the classroom areas where there were presentations and speakers. After they emerged from the conference, the kids were even more excited. Brigid and Allan stopped them to ask who they were and where they were from. Hearing from the students that they were a “Birding Team” from the Fulton Learning Center, the Berger’s where inspired to create that kind of opportunity for young people in the San Antonio Bay Area. 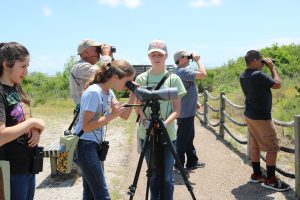 Unfortunately, the 2017-2018 Program was cancelled due to the impact of Hurricane Harvey. The school experienced heavy damage resulting in a significant loss of school days and a huge disruption to normal school operations. We are hoping to resume a program in future.

Other Bird Education Programs facilitated by SABP and the Texas Master Naturalists: